Coming into meteorological spring we had a cold and snowy winter in the southwest of the province and a warm and dry winter up north, conditions were near normal over the central portions of the province. The warmth was in part due to a milder January and a very strong February that, many areas saw temperatures soar well over 15C, even in the Capital region. Such heat might not be seen again until well into April.

Overall Spring will be colder than normal over much of the southern and northern part of the province, near normal to warmer than normal in eastern Alberta.

An area of warmer and drier compared to normal should extend east from the Capital region due to a lack of any snowpack in addition to seasonal models not showing significantly wet over that area. Precipitation will be above normal over the foothills contributing to a higher flood risk than last year. The rest of the province will have closer to normal rain and snow. 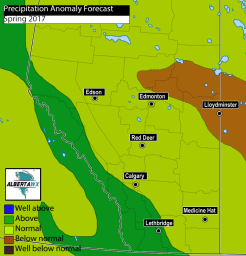 March: Much colder than normal, wetter in the southern part of the province. Dry over East central Alberta.

April: Beginning of cold and very wet, The pattern will transition at some point to a much warmer and drier pattern as a warm pattern builds in the northern part of the province. The area near and east of the capital region possibly reaching the 20s first in the province for the year. Cool and snowy weather lingers along the foothills and southern Alberta. Significant snowstorms are a high risk through much of the province.

May: As northern Alberta warms up colder conditions might linger in the southern part. Heavy snowfall is a risk well beyond the May long weekend. Above normal temperatures may not take hold south until late May or into June.