I haven’t been around much to update the website. Our Facebook has been much more active, unfortunately we have neglected the website. I am hoping to make more use of the website in the coming season as my son has gotten older and I have more time on my hands.

This year I managed to get a couple of chases in but I didn’t upload much as far as content there was a few chases that were pretty decent. It was a fairly active year so often times I ended up looking mournfully at the radar from home or work.

Our chase team has basically shrunk to just me for now. Matt Melnyk left because most of the AlbertaWX is based in Edmonton and he moved down to Calgary for work. He wanted to have chase partners that were nearby which is understandable. Mike Rurak wanted to start his own page under his own name even though we still chase together he won’t be posting under the AlbertaWX name.

We have aquired some new members; a couple of pilots who will remain anonymous for now and we still have our team of people who help out with the graphics and occasionally chase. The future remains bright for AlbertaWX as we look foward to the future. This year has been especially tough on everyone including storm chasers. We will continue to carry on and never stop chasing.

A sharp cold front will trigger strong thunderstorms early this afternoon; moving rapidly eastward as the afternoon progresses. Large hail and strong winds will be the main threat, with the possibility of a few organized supercells in northwest and north-central Alberta. 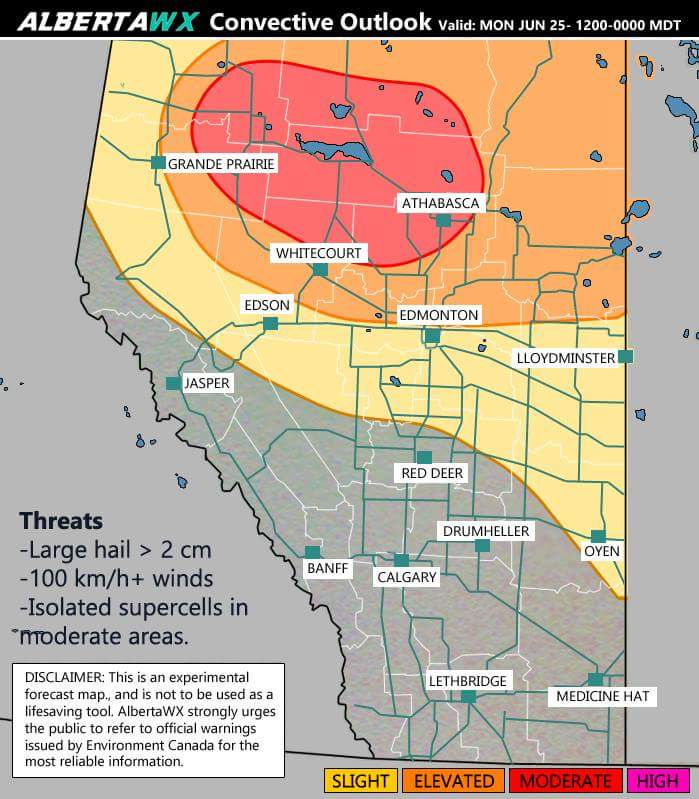 We were pretty close with our spring 2018 forecast with the colder and wetter season, We also got close with the timing of the rapid warm up. By the end of April temperatures peaked in the high 20s. May finished off as either the warmest on record or in the top 3.

The consensus on summer 2018 is that it could be significantly hotter than later year. 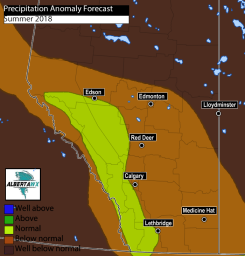 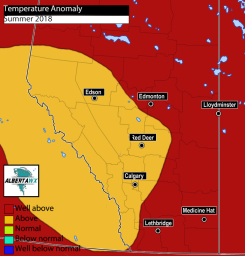 Overall summer is expected to be much hotter than normal, with relatively less strong heat along the foothills in addition to closer to normal rainfall. The northern part of the province could be extremely dry in July and August. Temperatures potentially flying past the 35°C degree mark. Thunderstorm activity could be the lowest in a decade for East Central and Northern Alberta. More elevated convective activity can be expected in the northern foothills.

June: The closest to normal month of Summer 2018, A modest amount of rainfall and near normal temperatures overall for the first 2 or 3 weeks but growing hot toward the end of the month. Thunderstorm activity will be low save for a few outbreaks mid month.

July: Becoming very hot, especially in the 2nd half of the month. Temperatures could surpass 35°C in many areas and near 40°C in the south. The foothills should be able to stay clear of that mark Red Deer being the largest city to avoid passing 35°C. Rainfall could be nearly zero in the some parts of the province.

August: Very hot conditions continue or amplify. Temperatures could surpass 35°C in Edmonton(esp Blatchford) and Calgary. A break in the drought conditions. A note is that Edmonton surpassed 35°C in 1998 and in 2008. Dense forest fire smoke might prevent such extreme heat much like it did last year and in 2015 (we have a post about that from last year).

Thunderstorm forecast: Summer 2018 has the potential to be the quietest in a decade due the a lack of moisture and persistent ridging. However the northern foothills could see an active storm season which could spark copious forest fires.