The cape was high but with the helicity very low so I was not expecting much more than pulses today.
Instead a surprise in the form of a dozen supercells forming over central and Southern Alberta proved again that the computer models are useless.
At first what appeared to be a pulse east of Leduc quickly turned into an LP supercell and turned sharply right, and made a beeline down highway 2A

The storm rapidly intensified in the warm and humid air that was much warmer than was forecast.
The storm passed over Wetaskiwin denting cars all along the auto mile with quarter to loonie sized hail. This ended a 37 day period of minimal thunderstorm activity for the city.

Me and Matt then followed an intense supercell near Camrose even while the first storm was still trucking along. At the peak we had 4 supercells in a 50km radius of our position. Each was discrete and the day was almost perfect.

Though Matt was hoping for some lightning shots the supercells offered some of the best structure of 2013. 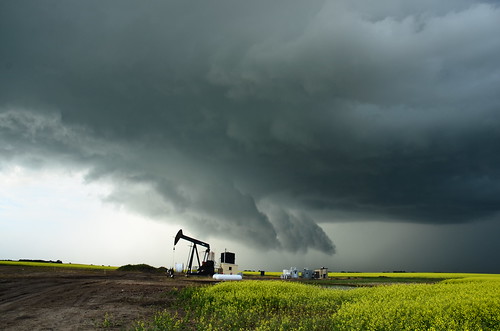 The helicity and shear is significantly higher for tomorrow, so if the same dynamics as today are in place we can expect potentially viscous supercells with hail in excess of baseball size in some of these storms.
Wind gusts of over 100km/h and microbursts with a concern and the risk is there for tornadoes if lower level shear is stronger.