After a winter that at times(mid-late Dec) seemed lacking in terms of warmth for a super El Nino. The month of February took off with temperature anomalies as high as 8C above normal. While not the warmest February on record it still ranks in the top 5. Dec-Feb 2015/16 finished off warmer than that seen during the 1997/98 Elnino. The main difference is the Lack of a big January cold snap and February(and not Dec) having the very warm temperatures. By the end of the month temperatures soared to 15C as far north as Edmonton. Cold weather was isolated to 1 or 2 days at a time. “winter” as described by Canadians lasted from Mid December through to Mid January. 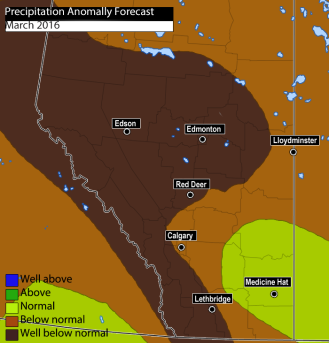 Spring shows the same pattern if not stronger, peaking in March and Early April.

March: Overall very warm and dry. There is the potential for top 5 warmest much like February.

March 11-20: Mild to very mild, dry with day or two of cooler weather with rain/snow.

March 21-31: Very mild. Almost summer-like in southern Alberta and dry. The early heat might trigger the first major fires of the season and a good chance of dust storms and thunderstorms throughout most of the agricultural regions of Alberta. Early arrival of allergy season

April 1-15: Mild to Warm, small chance of a snowfall. A few very windy days with dust storms possible. Extremely dry in some areas. Humidity could dip below 10%

April 16-30: Warm to hot: a few cooler days with rain. Early leaf out leads to rising humidity. A chance of the first Severe thunderstorm of 2016 in the province.

May: Warm to hot: closest to normal of the 3 spring months. Normal to below normal precipitation.

May 1-15: more seasonal with a chance of a heatwave or two. Dry weather broken by thunderstorms