A look back at spring 2017 we can see we did well with our forecast the spring colder and wetter than normal with the exception of May which help equalize the season. Temperatures trended warmer quite quickly as we expected in early May getting near the 30C mark several times. May overall was 2-5C warmer than normal with near to well above normal precipitation. Though the extreme northern region was much drier than normal 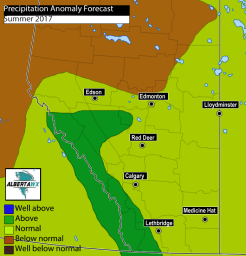 Overall Summer 2017 should be hot and humid over all but the most eastern sections near the SK border, The highest temperatures compared to normal are expected to be in the NW part of the province. Rainfall will be above normal along the foothills and int he Rockies promoting a higher flood risk for the major rivers. Drier than normal conditions should dominate in the northwest.

Thunderstorm activity should be higher than normal over the foothills and parts of Central and southern Alberta.

June: near to above normal temperatures over most of the province with above to well above normal rainfall in Central and Western Alberta. Thunderstorm activity will be higher than normal in parts on central and southern Alberta. There is a chance of a flood event along major rivers mid month. Main area to watch for severe weather is the southern portion of the province.

July: Dominant ridge shifts eastwards. Heat and humidity could reach warning levels at times, with humidex index exceeding 40. Temperatures could surpass 35C especially in northwestern Alberta and southern Alberta. Thunderstorms during this month could be exceptionally severe(very high TSI), areas and events to watch are the foothills, yellow head corridor west of Edmonton, and the QE2 corridor. Rainfall near to slightly below normal in southern and Central Alberta, well below normal in northern sections.

August: Cooler temperatures return with the main ridging pattern shifting back to the west. Thunderstorm activity shifts into NW Alberta as conditions turn wetter. There is likely to be extreme fire risk in that part of the province by this time. Early frost may be a concern in eastern Alberta. Main area to watch for severe weather would be the peace country, Grande Prairie area, and the northern foothills.