Starting tonight and lasting partly into Wednesday amounts of 30-70mm are expected to fall over a large part of Alberta. The significance of this system is the time of year. All time records for a singly day rainfall in April are lower, around 25-50mm. This means that the forecast amounts are record breaking.

I’ve made this map to show where I believe the heaviest rain could fall. The Drayton Valley, Pigeon Lake area could see the most 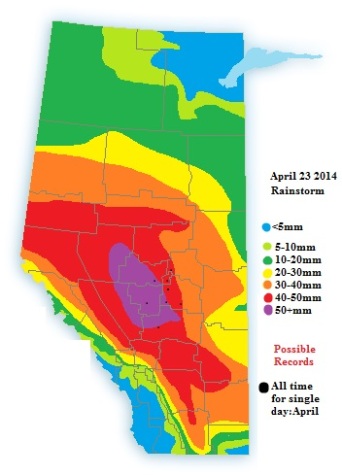 While climate Data seems to be hard to find I have found a few sites in the heaviest rains that may set a new monthly 24 hour rainfall record. In which the forecast is within 5mm or is experted to exceed the record

Stay tune for more updates. EC will likely issue a summary of the if records are broken.