An unusually warm and dry October resulted in many bug filled fall days in Alberta, the warmest since 1988 in Edmonton.

Overall temperatures were 2-6C warmer than normal with the highest anomalies in the western half of the province. Thanksgiving weekend was the hottest part of the month with much of the province basking is temperature as high as the upper 20s. The month ended with some dense fog, flurries and mountains snows

November may or may not beat out these anomalies. Even with many of the factors are “though the roof”; there is a that one model out when it comes to November 2015. EC’s seasonal model output shows a cooler and snowier than average November; however just about every other forecast out there is the complete opposite.

So lets look at what we have for factors going toward the overall pattern.

El NINO: With NINO 3.4 anomalies now reaching 2.7C and still increasing; the chance is higher this el nino will become the strongest ever recorded .

Arctic oscillation:  The AO is currently positive and is getting stronger in the positive direction. This means a much lower chance of cold snaps and higher chance of a strong jet

The stronger jet should result in higher percip in the foothills thus lower temperatures and more snowfall. The eastern part of the province should see a warm and dry November overall 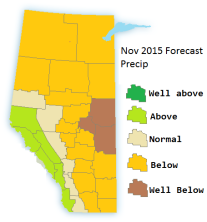 Nov 10-20: warm and dry, stronger than normal winds likely in the south. one or two days with showers and flurries. Another mountain snow event

Nov 20-30: Mild and somewhat dry.  Chance of an ice storm(freezing rain) in south-eastern parts of Alberta.