Summer 2016 Forecast: A warm and humid one

After a very dry start, spring ended with more than 100mm(4 inches) of rain. A dramatic end to the severe drought conditions. The same sudden switch to cooler rainier weather seems to be common of the ENSO cycle. similar events took place in 1998,, 1988, 1983, 1973, 1966, and 1958 following strong Elnino Events. Roughly half of these events saw the rain and cool air last through the entire summer, the other 3 saw temperatures heat up through August. Another factor is the developing positive phase of the PDO, this generally promotes an active pattern. The last +pdo spanned through the 80s and 90s. 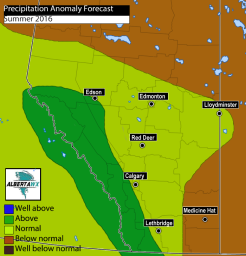 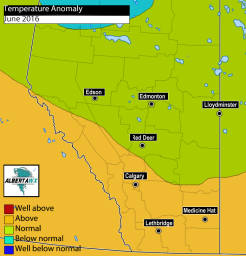 June: Temperatures near to above normal over most of the province. Extreme NW may be slightly below normal.

10-20: remaining warm and humid in eastern and southern Alberta. cooler than normal to near normal elsewhere. High thunderstorm activity in southern Alberta. Heavy rain in the elbow and to the east, lasting several days at a time.

20-30: Variable hot and cooler weather. Humid with higher risk of severe thunderstorms over most of the province. particularly in the capital region due to frequent airmass collisions.

July: Overall near normal to warmer than normal. Warmest compared to normal in the southern part of the province, potentially very hot. Rainfall becoming more near to below normal in some areas esp the NW. Very high thunderstorm activity in the central part of the province, including severe. Becoming hotter in the NW toward the end of the month.

August: Temperatures above to well above normal, rainfall below normal. Becoming very hot in the NW part of the province. This may spark a 2nd period of extreme fire risk. Extreme heat spreads into central and Southern parts of Alberta periodically. Thunderstorm activity should be far lower than the first part of summer.